A visit to Hadrian’s Wall

On Tuesday, 26th November, 2019, as part of the Antonine Wall Hadrian’s Wall project three members of the Greenhill Historic Society, Irene Ryan, Paul Cortopassi and Tom Rintoul went to the North of England. They all left the Falkirk area just after 7 a.m. and met up a prearranged point at Waverley Station, Edinburgh. There were another three persons there from Falkirk, Kilsyth and Bearsden along with three representatives of the Antonine Wall project.

All 9 boarded the 0900 hrs train from Edinburgh to Newcastle where they met other members of the Hadrian’s Wall project.

After the obligatory introductions we then started the tour which began at Newcastle Central Station. At this point there was a hoarding on the north concourse of the station which showed that the Hadrian’s Wall had previously been built on the site of the station and during construction of the station parts of the wall had been found. As you know I am right into railway history but this is something that I did not know about, however it will now be put into the archives for possible further reference.
We then got into two vehicles and made our way to Segedunum Roman Fort and exhibition centre at Wallsend and during the journey other parts of the wall were pointed out to us.

A full presentation was given by and about the Hadrian’s Wall project and how it had come about. There was a Roman Soldier sculpture made out of metal and viewing tower were people could get an overhead view of the fort at Segedunum.

Much of the stonework and outline of the fort is still in place and has been well preserved.

Swan Hunter shipbuilders, another icon of Wallsend was situated immediately to the south and below the level of the fort t Segedunum. Like the Fort it is no longer operational but there are a number of identifying factors which will hopefully remain for historic purposes and compliment the location.

The Museum contained a wonderful amount of artefacts from prehistoric times with a very large display of goods from the Hadrian’s Wall along with historical and year references.

Following on from the visit to the great North Museum the group made their way to Hexham, stopping en route at Heddon on the Wall. Although darkness had started to descend the group could still see the top row of stonework on the wall above the grasslands of the field.

The group then made their way to Hexham where they stayed at the Beaumont Hotel with dinner and breakfast. A stroll round Hexham at night saw the Cathedral and the illuminated gardens but nothing of the Hadrian’s Wall. 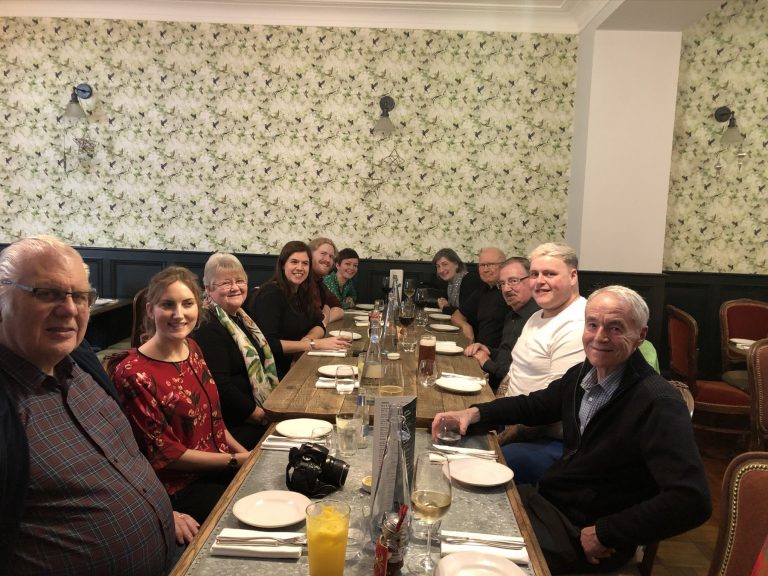 The following morning, Wednesday, 27th November, 2019, after breakfast the group the group then made their way firstly to Housesteads Fort which was a complete, although, in ruin of a Roman Fort. It was clearly visible, from what remained, that there were large buildings which encompassed the Commander’s House and apartments, the soldiers’ accommodation and washing and sewage systems, along with gardens. There were also remains of the central heating system in the buildings. Its name has been variously given as Vercovicium, Borcovicus, Borcovicium, and Velurtion in roman history and it is believed to have been built between 124 and 122 AD

Travelling west after leaving Housesteads the group then went to Whin Sill which is the remains of an extinct volcano. The picture illustrates the route of the wall round the outcrop and the lake. The stones which were used to build the wall came from local sources and not from the volcanic rock as it was too hard to cut.

The group then made their way to The Sill, a newly built landscape discovery centre, which is situated between the sites of Whin Sill and Vindolanda. They had lunch and time to look round the site which had plans of the area in both Roman and present day times.

Having completed the tour of some of the sites and forts on Hadrian’s Wall the group then made their way to Carlisle via Haltwhistle which is the “dead centre” of Britain, being equidistant from the north and south and also the east and west coasts. On arrival at Carlisle there was the opportunity to visit Tullie House Museum which contained artefacts of the Roman Era and Wall.

All Picturescc Rediscovering the Antonine Wall