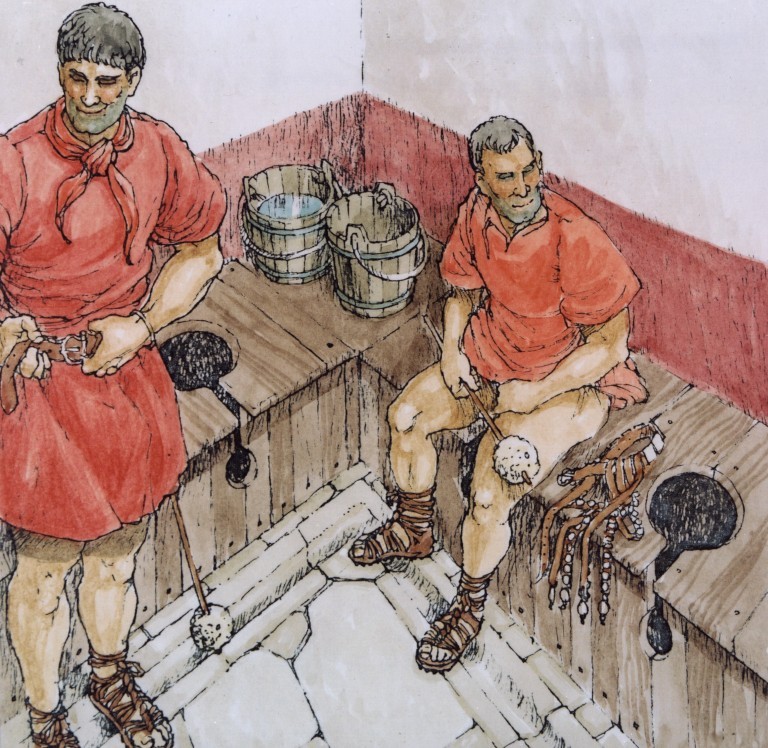 As they sat chatting, I wonder if Marcus and his pals realised that we would be closely analysing their ablutions almost 2,000 years later. The remains of many toilet blocks (latrines) have been found at forts on Hadrian’s Wall and the Antonine Wall.

The Latrine at Bearsden Bathhouse

A ten-seater toilet block at Bearsden Fort on the Antonine Wall gives us some fascinating insight into life on the Wall. For a start, the Roman soldiers obviously didn’t value privacy as much as we do. No cubicles here, just sitting cheek by jowl with no room for modesty.

Of course, we need a bit of imagination and some excellent reconstruction drawings to make sense of the ruins as they are today.
Running water flowed th

rough a channel under the seats which drained into two ditches outside. No soft Andrex though for the soldiers; instead they used a sponge on a stick which was cleaned in another water channel running in front of the seating. We can only hope that each soldier had his own stick although we do know that the soldiers suffered from infestations of worms. So perhaps sharing is not always caring!

Let’s get things moving….what’s in a Poo?

Undigested bits of food within faeces (poo to you!) can live in the soil for thousands of years. Scientific analysis of the poo found in the ditches at Bearsden Fort and elsewhere along the Antonine Wall not only tells us about the soldiers’ health but also about the food they ate.

What’s for dinner today? The diet of a soldier on the Antonine Wall

Now, before we start, forget what you might have heard about dormice and any such delicacies as depicted in the wall paintings and mosaics in places like Pompeii in Italy. That was the food of the wealthy Romans living in the Mediterranean. Soldiers, like Marcus, in Britain had neither the money nor the weather to be able to enjoy such lavish food.

The diet of the soldiers on the Antonine Wall was mainly a vegetarian one although some animal bones excavated at Bearsden Fort indicate that they did have some meat in their diet. Traces of oysters, mussels and whelks have been found at other forts on the Antonine Wall.

The staples would be local ingredients consisting of barley, two types of wheat: emmer probably used for porridge, and spelt probably made into bread.

Food remains in cooking pots show that that durum – or macaroni – wheat was used at Bearsden possibly to make pasta. So, maybe the soldiers enjoyed a Friday night takeaway pizza just like the rest of us. However, if Marcus had been a naughty soldier, he may have been given ground barley grain fragments which were possibly used as punishment rations.

There is also evidence of wild fruits such as strawberries, raspberries, brambles, blackberries, and bilberries along with nuts and vegetables such as celery, wild turnips and radishes.

o formed part of the diet and we know this because cheese presses have been found at various sites.

For special occasions and for the Commandant in the fort, more exotic foods were imported from elsewhere in the empire such as figs, coriander, opium poppy seeds, olive oil, fish-based products and wine.

Back in December, Marcus got help in the kitchen from Carolyn when she made some Mustacei (spiced cookies) as a treat for the Roman festival of the Saturnalia.

Bits of bowls, pots and dishes have been found all over the fort and it looks as though the soldiers were preparing, cooking and eating their food in and around their barracks. TV dinners without the TV!
Table manners were perhaps not high on the agenda. Very little cutlery has been found, so it seems that they ate with their fingers.
Let’s hope they washed their hands after the visit to the latrine!

Fancy joining Marcus in the latrine…or in the kitchen?
If all of this has whetted your appetite, then why not visit Bearsden Fort and see the remains of the latrine for yourself?

The site of the fort is tucked away within a housing development at Roman Ct, Bearsden, Glasgow G61 2HS. You can park at the Bearsden Baptist Church where you can enjoy a wee cuppa after your visit. Watch out for our next guided tour of the site.

If you are feeling a bit peckish, why not have a go at making some of the delicious mustacei and let us know how you get on? Marcus is busy writing his own cookery book – watch out for it.